This past Saturday was Free RPG Day and I headed over to +1 Gaming, my Friendly Local Gaming Store, to pick up some free shit and to buy some new dice for a friend in one of my games.

I made sure that I’d be there soon after opening to get a module by Paizo that I’d had my eye on – We Be Goblins Too!, a sequel to 2011’s Free RPG Day offering of We Be Goblins!

The way that Paizo writes goblins is pretty much hilarious. Funny little buggers. In these little one-offs, the players get to actually play as the goblins, out for a bit of mayhem.

Paizo has also made little minis for the pregenerated and NPC characters, at $3/ea, which is neat. What’s too bad, is they’re blindboxed – you don’t know which one you’ll get.

Thankfully, there are some enterprising individuals who buy a bunch, and sell the 12 individual minis as a complete set. I found one on eBay, and after shipping, I paid $3.50 each for the whole set – a good deal. Not only will these guys be handy for the mini-adventures, they’ll be useful for my other Pathfinder games. 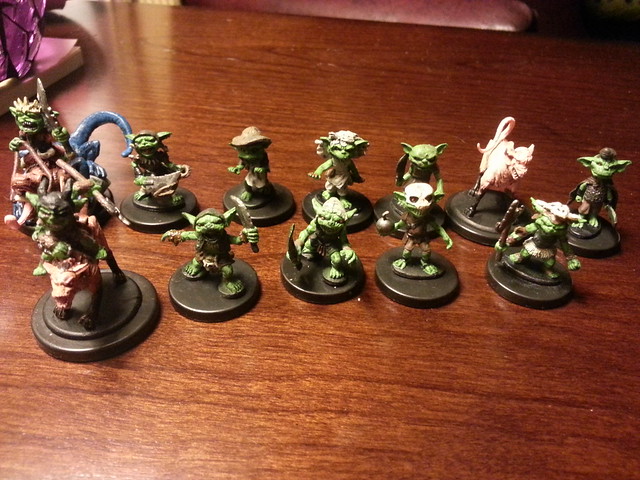 Goblins race and goblins jump, Goblins slash and goblins bump,
Burn the skin and mash the head, Goblins here and you be dead!

Chase the baby, catch the pup, Bonk the head to shut it up!
Bones be cracked, flesh be stewed, We the goblins—you the food!