It’s starting to get warm again, and that means that for those miserably hot months before Saints season1, me and a bunch of other idiots2 will be spending our Sundays losing half our body weight in sweat, only to replace it with beer.

We had our first “practice” tonight in City Park. It wasn’t really big or structured, but we had enough people to throw the ball around and do some light kicking drills. Everyone likes kicking drills3.

And before you start saying “Really? Practice?”, I’m going to say yes, really. Kickball, if you play even remotely competitively (we’re in a “beer league”, after all), is actually quite a good little workout. Especially as pitcher (my position). Lots of little sprints, a lot of quick throws to first, and every pitch itself is actual effort. Plus, that iconic red ball doesn’t throw easily/far. It’s very easy to get sore playing a full 7-inning game of kickball. It’s a lot of arm use, and it’s a lot of twisting motions on your core.

So, it was fun and light, and I’ll probably be a wee bit sore tomorrow, but it’ll be a good sore. 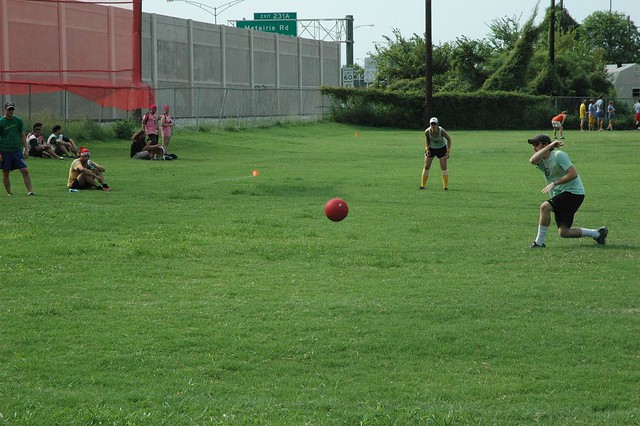 1) Don’t even get me started. So much stupid going around.
2) We’re the Hooked on Tonics. We play for Pal’s Lounge. And yes, I include myself in the idiots grouping.
3) It’s not so much a drill as it is just kicking it. A lot. Still, fun.