When it was announced about a year ago that the Marigny would be getting added to the streetcar line, I had to change my pants. Then, the skepticism kicked in and I said I’d wait to be excited until I saw work.

Well, they’ve been diggin’ up Loyola from about Girod to Poydras, and I’ll be damned if what they’re putting in doesn’t look like streetcar tracks. I haven’t read too deep into the track plans, but Loyola does become Basin at Canal (well, it becomes Elk at Tulane, then Basin at Canal), so color me excited.

What’s neat is that the streetcar will be but a few blocks from my house. I’m excited for a few reasons:

I’m glad I’m not directly on the line, but about the same distance from the family house I grew up in to St. Charles Ave. It’s soothing I think to hear the faint sounds of the streetcar in the not-too-far-but-far-enough distance.

And apparently, support is still needed. I signed the petition at change.org to extend the line down to the end of the Bywater, and there’s more overall info at Transport for NOLA. 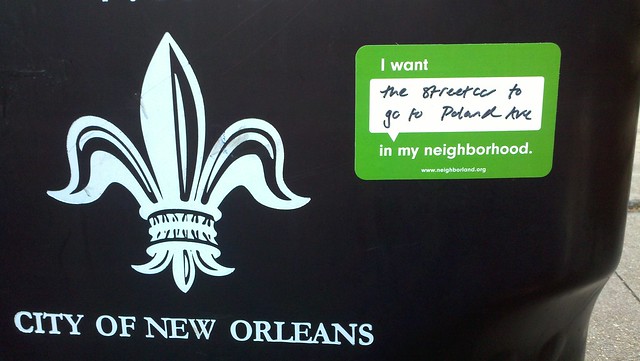