At the time that Paul started up his Shadowrun game using Numenera‘s Cypher System, I knew I wanted to play, but didn’t think I had the time.

Paul had done an excellent job updating the world-building that had been previously done w/ Shadowrun – a neat cyberpunk setting where magic and tech co-exist – and updating it with more modern events and having New Orleans be a focal point. We refer to the game as Shadowrun: Neo Orleans and the role-playing heavier Cypher System fits super well with the lore and feel of Shadowrun.

Sarge is a Strong Troll Glaive who Wields Two Weapons at Once, in Numenera-speak. Basically, he’s a tank. He is a former NOPD Sergeant, but also, uh, “freelanced” a bit. And got busted. So after a stint in prison he couldn’t return to the NOPD, and became an as-needed enforcer for the Leonidas Lords – a gang he’d occasionally do business with before.

The existing party needed muscle on a visit to a warehouse, and had hired two guys related to a Vietnamese chemist. One wasn’t available, so Sarge filled in. As it turns out, he recognized a person in this group – Taki (friend of a punk-ass named “H.C.“) – whose sister he used to be involved with. And apparently she was once married to Ebon, one of the other members of the group at one point, too. Neo Orleans is a small town.

Now, he bounces for/lives above/co-owns the Fallen Angel – a bar in Lakeview – and enjoys these little adventures with his new friends. And H.C. He pretty much hates H.C., which makes for some fun roleplaying.

And, this past weekend I found the perfect set of dice for him (I like to co-ordinate my dice with each character) at Comic Con! 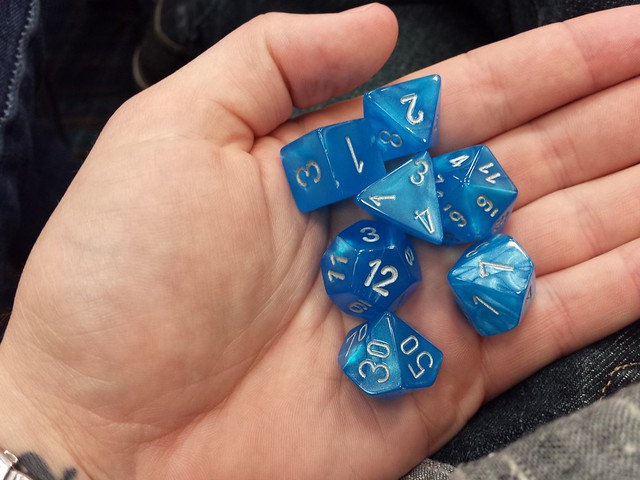 Anyways, Sarge keeps a sort of log of these trips over at lmddd.org, if for some reason you’re interested in reading more.