Besides the obvious Cthulhu awesomeness (yaaaaay H.P. Lovecraft!), I thought the setting would provide for really good roleplaying and collaborative storytelling. We weren’t being dropped into some world where we as the players (not the characters we’re playing) aren’t familiar with the land, the customs, the politics, etc. This is New Orleans. All the players are either from here or have been here for so long that they might as well be. At one point, our characters drive to Audubon Park, in the middle of the night, in the middle of a thunderstorm. Anyone who has ever lived in NOLA has basically done that.

You don’t need to imagine such things – you just take your own personal memories and modify them to suit what the character is doing. And for me, there was an extra neat bit: our characters drove by my real family’s home, where my actual grandfather would have been (he was born in 1922), hopefully either sleeping or causing a ruckus. Just neat.

Anyways, Skip recently was part of the Miskatonic University podcast (Episode 32), talking about our game and characters, and the New Orleans setting for this RPG in general, so I figured I’d dust off this post that I’d saved as a draft last November and actually post it up. Here’s the character I developed:

Artcurus Skwisgaar (or just Art for his American friends) was born in Göteborg (Gothenburg) Sweden in 1867. Born and raised in Sweden, Arcturus always seemed to have a natural affinity for music, especially stringed instruments. While his mother encouraged his natural ability in music, his father taught him how to fish and navigate by the stars. When he was old enough, he traveled through Scandinavia and Europe, paying his way by his well-honed crafts.

While in Paris, one of his music students – a gifted violist named Erich Zann – introduced him to jazz. Art was smitten, and decided to head overseas to a city where his skills as a fisherman and a musician would be well appreciated – New Orleans. He currently resides in the French Quarter in a nice little 3rd floor apartment with a view of the river (currently occupied by my friend, Sixth Ward Girl). He plays several regular gigs in various clubs and speakeasies around the Quarter.

Arcturus is not aware that before leaving Sweden, he fathered a child and as a result is the Great-Great-Great Grandfather of Skwisgaar Skwigelf, lead guitarist of Dethklok. Yes, I actually worked out the rough ancestry dates to do this. Nerd.

Anyways, he’s been a lot of fun to play. I made him older realizing that it’s give him less hit points (he only has 10), but vastly bump up his Know score (95). Just managed to fit right. Also, with his maritime background, he’s really good with a knife.

He’s managed to survive relatively unscathed so far, but you never know. His doom could be lurking in the nearby darkness.

When we played last, I basically killed all the lights in the room, and we played in the candlelight. Added an appropriate ambiance. 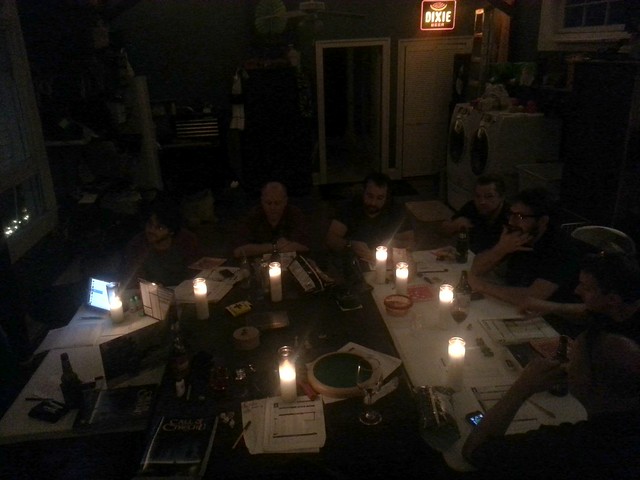 Lastly, Ruth has put together an excellent compendium of Lovecraft’s works for free, in ePub, MOBI and PDF formats at CthulhuChick.com. Check it out!