One thing I’ve been working on at home is making it cheaper to live. We’re in the last part of a refinance (the mortgage will be going down $300/month!!), and the weather is cooling drastically – which means tracking down drafts. Winter (or, non-Summer, really) also means spending quality time in the attic, finishing the radiant barrier install and rolling out insulation.

As with most things, you have to spend money to save money, which is why we just did a solar panel installation with Joule Energy! They listened to what I wanted, what I didn’t want, and presented me with a few build options. They handled all my applications: City of N.O., Historical Districts & Landmarks Committee, inspections, and Entergy. Not having to deal with all that really made this process a breeze. They also have a pretty dynamite referral program, so if you do drop them a line, please tell them Will T. sent you!

I was thinking about breaking this up into three pieces: planning, funding, and installation. Instead of creating a few things to link to, I though it would be better to just have it all in one big post. So here we go.

A big factor of this whole process was the size of my array. My house is pretty long (~120ft), and runs East-West. Plenty of South-facing roof to harvest energy, which really expands my options regarding placement and overall array size. Space isn’t really an issue for me, but may be for others.

The first thing I looked at was my power bill – it really is more informative than you think. Also as a sort of a disclaimer: the months on Entergy bills are shifted one month. Anything that says November is really October. They mail the bill for October usage in November, so they label it the November bill. It doesn’t really change much, just if you want to line things up properly, you have to shift everything.

Below is my actual (but scrubbed of individual data) power bill from the other day – the “November” bill that is October data. When I was originally looking into this, I was looking at costs to build out a system that would cover my peak summer usage. But after looking at those huge costs, I remembered I was not trying to get off the grid, and therefore took a second look at my more average months. Our off-peak average monthly usage is at most in the 600-650kWh range – less than half of our peak usage.

I ended up settling at an 800kWh/month (7.2kW) system (the red line in the image above). We’d over-produce for ~2/3 of the year, and the other peak bills would be at least half of their usual size. A fine compromise, especially since we’re feeding the grid.

Even with our recent week-long power outage from Hurricane Isaac, I felt that feeding the grid (aka net-metering) was the better way to go. No batteries (less cost, maintenance), no segregating breakers to be solar-only, no energy rationing, just an overall simpler system. In the event of another major strike to the grid, I’d be powerless along with my neighbors, but a small natural-gas powered generator will cover me. I wasn’t looking to go off the grid, so therefore I don’t need to lower my consumption by rationing or come up with a higher generating solar array.

This can be a tricky part, but I think I’ve worked it out as well as I can. Now again, we have a relatively large array – the total cost of parts and labor rolls in at – wait for it – $50,000.

But before you run away screaming, hear me out. In the state of Louisiana, you can get 80% of the system back in tax credits. The Feds will give you back 30%, while Louisiana will cover 50%! But, both handle the tax credits differently. While Louisiana will write you a check after refunding your taxes, the Feds will not. They’ll just refund the taxes you pay until the credit pool is gone.

This makes things potentially a little tricky. Joule partners with a company called EnerBank that provides loans for these sorts of things up to $45,000 with a one-year, 0% interest / same as cash setup. This gives you plenty of time to get your taxes credited – and you’ll want to get that handled, too – after one year the interest rate is something like 17%.

I’m currently paying down the loan, trying to get it as low as possible during the 0% interest time period. When that’s up, I’ll put the remaining amount on our home equity line of credit and a MUCH lower interest rate.

Since my total system size exceeded the max loan amount, I also needed to come up with $5k. We’ve been going through a house re-fi, and I also needed a bunch of cash for that as well – didn’t want to roll those costs into the loan. What I was able to do though to not stress about the money was to borrow against my 401(k) from work. I was able to pull out enough cash from that to cover all these expenses, and here’s the best part: since I’m borrowing from my savings, I pay myself back. With interest. Take a look at your 401(k) plan if you have one to see if you have this option. The interest on the loan is only 4%, the payments are relatively small, it’ll be paid off in 5 years, and most importantly, ALL of it goes to my retirement plan.

While doing research, I came across this little tidbit: while this array counts as an improvement and raises the value of my house, the Orleans Parish Assessor is not allowed to tax me on the improvements! Neat!

Also, based on target energy production, my portion of the system will pay for itself in lower Entergy bills in about 6.5 years.

Now, our situation will different from everyone else’s, so you may not have these options. This is just how I was able to make this happen. 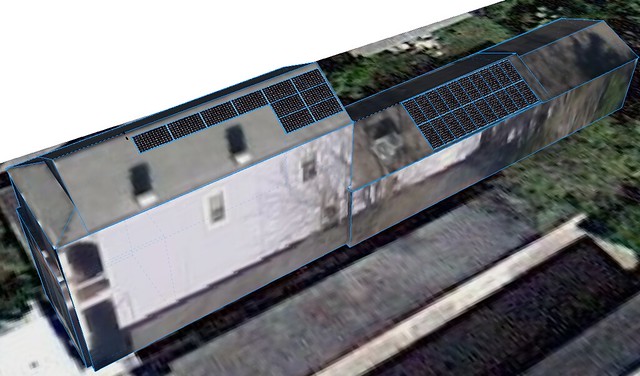 2nd Floor, from a few houses down: 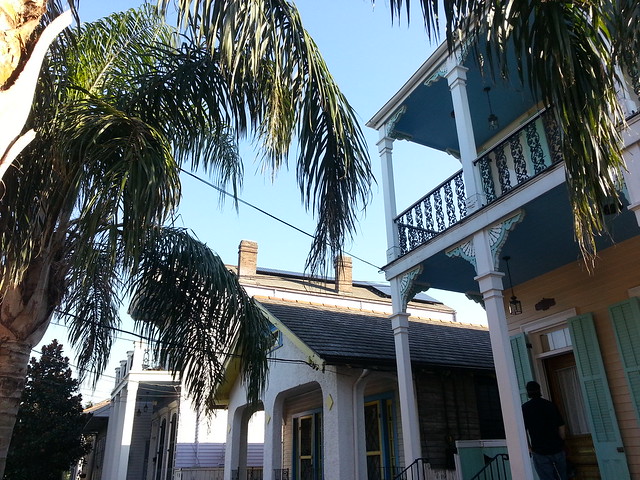 1st floor (not visible from street): 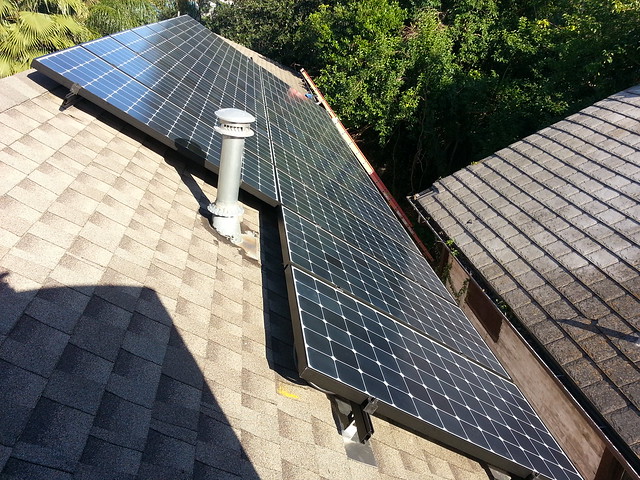 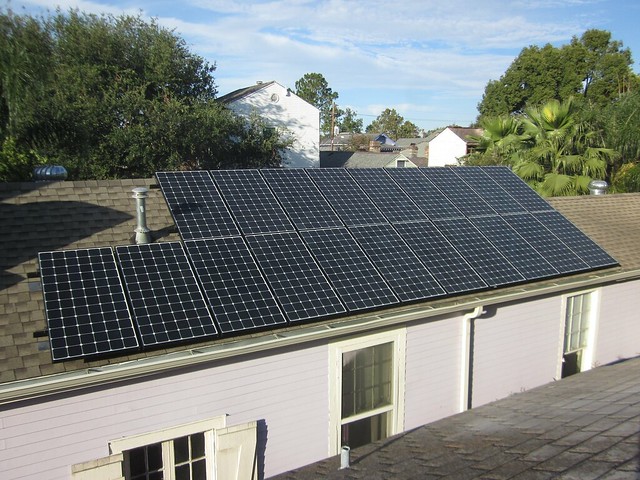 Yesterday, I got the login info to the monitoring webapp (there’s also Android and iOS apps). I didn’t hear about Entergy coming around to swap out my meter, but the data looked live. I went outside to take a look at my meter, and the dial was spinning, and far too quickly for the miniscule amount of juice I knew my house was using at that moment. After looking at the direction it was spinning (right-to-left), and comparing it to a neighbor’s meter (left-to-right), I realized it was indeed running backwards! Huzzah!

And the webapp, showing live data! Break it out of frames here: Power Monitor.

Looking at my bill for the last two (actual) Novembers, my average daily usage is about 17kWh. Currently, I’m generating on average 38kWh. Hooray, math.

Also, I have both installed radiant barrier in my attics and helped install it in friends’ attics, and noticed a huge difference in attic temperature, which directly and vastly affects the ambient temperature of the rooms beloew it, and the resulting A/C usage. Since these cover the roof, I’d imagine they’ll also provide a similar effect in reducing the temperature of the attic because that portion of the roof isn’t exposed to the heat of the sun.

And again, Joule has a pretty good referral program, so if you drop them a line, tell ’em Will T. sent ya.